Maintaining our own seed allows the farmer to adapt seeds to his or her location and growing methods. Seed saving requires open pollinated varieties. Development work in the last 50 or more years has been almost entirely based on hybrids. While hybrids have advantages in creation of corn that is both uniform and productive, we can create open pollinated varieties that are better than any op’s now available. 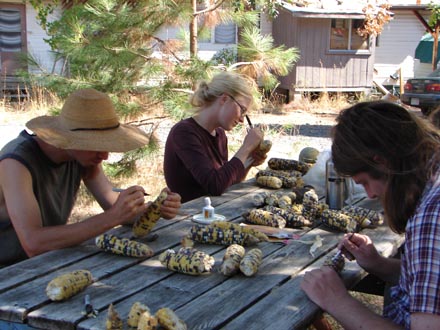 Creating sweeter open pollinated corn varieties suited to organic conditions will improve the ability of organic growers to complete the cycle of agriculture by saving the seeds they use. Very little corn grown commercially today is open pollinated. Crossing in and stabilizing organic-grower-friendly traits may make using open pollinated corn more of an option.

There appear to be no fully sugary enhanced, open pollinated corn varieties on the market. There are numerous organic-friendly traits in older open pollinated varieties that would be desirable in an organic corn today. Today’s markets expect enhanced sweetness. Many seed companies, farmers and gardeners desire open pollinated crops.

The outcome that will measure success in this project will be sugar levels (in year 2 or 3) that are consistent with those found in sugary enhanced hybrids. If I can take these two populations, which have only some se genetics and are not all that sweet, and make them comparable in taste to a modern se corn, I will have met that second objective. Documenting the procedure will fulfill the first objective.

A final project report will be posted upon completion.