This project focuses on thrips, one of the most important pests of organic greenhouse production nationally and a common reason why growers suspend organic practices in greenhouse ornamentals, fearing crop loss from this persistent virus-transmitting pest. 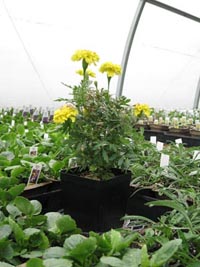 This OFRF-funded research project was first conducted in the 2008 growing season and results were promising. Marigolds were highly attractive to WFT even when populations were low. Predatory mites were sustained within the marigolds; fungal innoculum remained viable and WFT populations were lower in the greenhouse having marigold guardian plants with biological control agents.

Because growing conditions change every year, we are repeating this experiment to further substantiate our results and confirm the reliability of the system. The guardian plant concept is based on the fact that adult WFT are attracted out of the crop to the flowering marigolds where they will become established. Immature WFT will serve as prey for the predatory mite, Neoseiulus cucumeris, sustaining them and encouraging dispersal through the crop. WFT escaping predation will drop to the soil to pupate where they will become infected with fungi. The granular formulation will enable the fungus to colonize the potting mix, eliminating the need for reapplication.

This represents a low-cost, organic approach. Because fungal treatments and mite releases are applied to the guardian plants rather than the entire crop, management costs are reduced while control is maximized.