The high value of organic hops (up to $10,000/acre gross) makes them an especially attractive crop for small to midsize organic farms. Organic apple farmers may be especially well suited to hops production given the similarities between modern, high-density apple orchards and hops production. These similarities include: perennial production, the need for trellising or other structural support, as well as comparable harvest dates (August-October).

However, potential hops production in the upper Midwest also presents significant challenges such as selection of varieties well adapted to microclimatic conditions and local markets, development of realistic expectations for the cost of production, and assessment of potential pest management issues.

We established an experimental hopyard at AlMar orchards in Spring 2009 to answer some of these questions. Sixteen certified organic hop varieties were planted in a single trellised row. Hop varieties had representatives from both bittering and aromatic hops.

The sixteen varieties of hops rhizomes planted were: 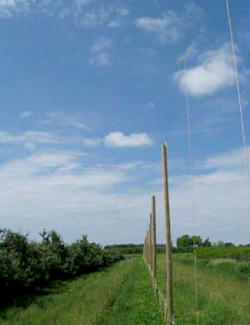 A single row of hops was planted in an area measuring approximately 50’ x 800’, ~1 acre. Hop vine spacing was approximately four feet with support posts for trellis wire spaced every 30’. The posts used for the trellis were 5” in diameter and 20’ tall with 4’ set into concrete. Trellis wires were set at 16’ (the top of the posts) and 3’ with trellis wire and a pair of earth anchors placed for every eighth post. Twelve gauge steel wire was used for trellising. A drip irrigation system was established in April 2009, utilizing the 3’ wire for support. Irrigation emitters were placed in between rhizomes to minimize moisture deposition on the vines. Iin April 2009 a single vine from each rhizome was trained to the trellis system using orchard twine, and additional shoots pruned off at the crown.

Data collected in our first year of growing hops was limited by unusually cool summer conditions (the 10th coolest summer in Michigan recorded history) resulting in slower than expected hops vine development. Our efforts were focused on collecting data on the weekly growth of the 16 hops varieties and the relative abundance of pests. First year establishment of a hopyard using materials adapted from high density tree fruit cost approximately $7,317.

The first harvest of cones was on August 27, 2009, and the final harvest performed on September 24.