Investigator: Steve Tennes, Country Mill Farms, Charlotte, Michigan
Project locations: This project will be conducted at seven farms in southern Michigan over a total of three summers (2009-2011). The farms include organic, conventional and mixed operations. 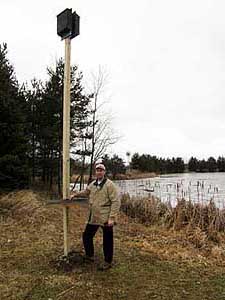 Organic farming involves creating a system approach that is in harmony with Mother Nature. Organic farmers must determine what the natural predator is of any harmful insect in order to keep its population in balance. Across several commodities, the moth order of insects are extremely harmful as internal feeders of crops like corn, apples, pears, peaches, oranges and even nuts. Specific species of bats need these moths as part of their diet.

Codling moth is the most destructive fruit pest for apples and pears across the United States and Canada. Bats can potentially act as a natural predator that could reduce codling moth populations. Targeting adult flying moths with bats in conjunction with targeting early life stages of the moths with existing organically approved viruses and nematodes will establish a comprehensive system approach to manage these pests.

This research project will monitor the current level of bat activity at seven apple orchards. The number of individual bats at an orchard can be potentially influenced by variables such as the distance from the application of synthetic insecticide, an open water source, a summer habitat and hibernacula (overwintering sites) suitable for that specific species.

Building upon existing bat research, this three year fruit project will determine the species of bats that are present on project farms, the composition of their diets, their pest management contribution and the best location for artificial bat habitat. This information will be used to develop a procedural model that organic farmers can follow in order to increase the bat populations on their individual farms.

The project is being done in cooperation with faculty and students from Michigan State University and Eastern Michigan University.

A final report describing the results of this project will be posted upon completion.