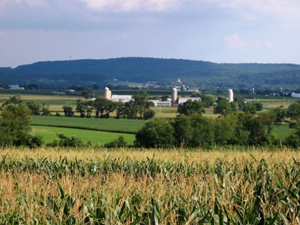 Researchers at the Rodale Institue Experimental Farm are leaders in the study of no-till organic farming systems, pursuing the advanced management of cover crops and a use of a roller crimper for cover crop suppression prior to planting cash crops into cover crop residue. The system shows promise for meeting the objectives of reducing weed pressure and subsequent tillage. However, researchers have also observed increased cutworm pressure in the system, and in this project they investigated the factors of timing and location in addition to application of OMRI-approved materials to mitigate cutworm damage. Study results point toward habitat manipulation as a more effective and economical strategy than material biocontrol inputs for cutworm management. Interestingly, the native soil fungus Metarhizium was also shown as effective in overcoming cutworm larvae.

Black cutworm (Agrotis ipsilon) moths arrive in storm fronts in early spring and preferentially lay their eggs in lush cover crops, crop residue, or weeds. When temperatures exceed 50°F, the cutworm eggs begin to mature. Much like each corn variety requires a certain number of growing degree units (GDUs) to reach physiological maturity, developing cutworms also require a certain number of heat units to reach maturity (and their most damaging stage of development instars 3-5). From year to year, the timing of the peak influx, or biofix, of cutworm moth varies with the timing of weather front arrivals. Then from the biofix, heat units begin accumulating at different rates – faster for warm springs, slower for cool ones.

Cutworms are most damaging 312-430 heat units after the biofix. Generally, in eastern Pennsylvania, it takes about 30 days from the time of the biofix for the cutworm moth to mature to its developmental stage with greatest damage potential. 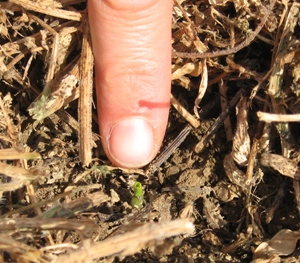 This project was undertaken to evaluate several cutworm control tactics in organic no-till corn so as to reduce challenges faced by farmers and ultimately increase adoption of the biological no-till system. Our specific objectives were to conduct on-farm and on-station trials to identify effective management strategies for cutworm in organic no-till planted corn.
VIEW THE OUTCOME