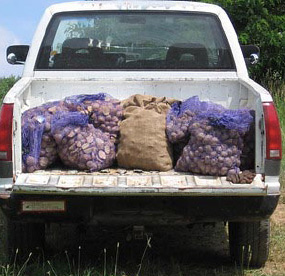 Unlike most crops, potatoes are propagated vegetatively from seed potatoes rather than from true seed. In contrast to true seed, in which most pathogens are excluded, infected potato plants transmit many pathogens to progeny plants through seed tubers. This poses a significant disease management problem. Use of certified seed potatoes which meet low tolerances for disease significantly reduces tuber-borne diseases in potatoes and has measurable economic benefits for growers.

Our project goal was to assess the feasibility of certified seed potato production on organic farms in Wisconsin. In this project we evaluated strategies to limit the spread of Potato Virus Y (PVY), which causes the majority of rejections from potato seed certification in Wisconsin. PVY is an aphid-transmitted virus that is also carried in seed potatoes. We trialed two strategies aimed at reducing aphid landing within potato crops a 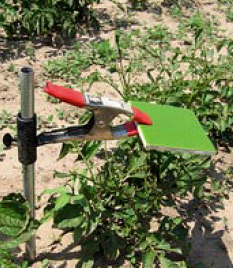 nd transmission of the virus.

1. Surround seed potato plots with a border of winter wheat. Aphids tend to alight at the edges of fields using the contrast between soil and plant foliage as a target . PVY is carried on the aphid’s mouthparts and is lost when the aphid probes an uninfected plant. Use of a border crop around potato plots has been shown to reduce PVY incidence, presumably due to discharge of PVY from the aphid’s stylet as it probes for feeding sites in the border plants. This strategy was trialed at all sites both years. In the second year, this strategy was expanded to include intercropping with winter wheat and also with red clover.

2. Spray potato plots with mineral oil. Mineral oil on leaf surfaces has been shown to interfere with transmission of PVY by green peach aphid. This treatment was trialed at one site (Igl farm) in the first year. An OMRI-approved mineral oil, Organic Stylet-Oil, was used.