The purpose of this project was to find a way to make aphid-infested broccoli heads marketable by inducing the aphids to walk away in response to alarm pheromone.

Organic broccoli can be made unmarketable when aphids infest the head. Aphid alarm pheromone is a compound or mixture of compounds that causes an aphid to leave its feeding site. Using compounds known to be released from cabbage aphids when they are crushed, we proposed to determine which ones cause alarm behavior in this species of aphid and then apply these compounds to infested broccoli heads to determine whether the head can be made marketable.

The project found no alarm behavior in cabbage aphids raised on crop plants.

All of the latter objectives were dependent on success with the first objective, and as no alarm behavior was seen on field crops, an intermediate objective was established, that of testing for alarm behavior in aphids raised on a variety of wild cruciferous species.

All research was conducted at the Good Humus farm, Capay, California, between February 2009 and January 2010. 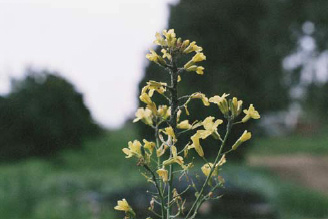 Host plants for the aphids were diCicco broccoli (Brassica oleracea), Chinese cabbage (B. rapa), the second-generation offspring of an apparent cross of bok choy and rapini (B. rapa), field mustard (B. rapa), black mustard (B. nigra), the wild mustard Hirschfeldia incana.

Aphids naturally colonized the broccoli and Chinese cabbage. The other p 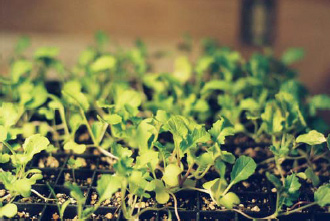 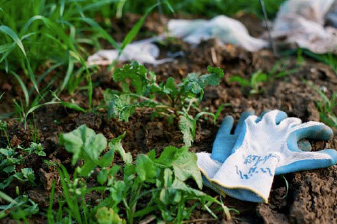 In most instances aphids were crushed with forceps to induce release of alarm pheromone.  On March 21 several inflorescences of diCicco broccoli with infestations of silvery-powdery aphids were clipped and brought indoors for testing. An inflorescence was placed on white paper and a crushed aphid held beside the aphid colony for 5 minutes while the aphid response was observed.  The control was crushed fruit fly (Drosophila melanogaster) pupae.  Five inflorescences were tested with aphids and four with fly pupae.

On March 28 aphids on broccoli inflorescences in the field were induced to release alarm pheromone by crushing or by the feeding of a soldier beetle or a ladybug larva, and the aphids' behavior was observed.  No control was used on this date.

On April 4 varying numbers of aphids on Chinese cabbage inflorescences were crushed to induce alarm pheromone release and held next to nearby aphid colonies while the colonies' behavior was observed.